It was my favorite kind of Georgia Night, luke warm with a light breeze. It had been so hot during the day, I specifically remember the breeze walking onto the porch at Rathbuns. We sat and talked about law school, food, cases and, mostly, the people walking on the Beltline. Easy night. Simple fun.
After an hour or so, we transitioned into the dining area inside of the restaurant. I ordered the smallest steak and bravely faced the jokes from my friends. After barely finishing my meal, we discussed options for the evening but couldn’t come to an agreement. I’ve lived long enough to know nights without direction or purpose usually end in trouble. So, to my friend’s chagrin, I texted my wife that I was on my way home.
I ordered a Lyft to get around that night because I knew I would have a couple drinks…or three. Admittedly, a night out with lawyers usually involves rideshare services for me. The night was now much cooler and the summer sun had set. Since my Lyft was moving slowly down Krog street, I walked closer to meet him, intercepting in a parking lot a couple blocks from the restaurant. I got into the back seat and after exchanging very short small talk, I, like most people, relaxed into the comfort of my phone screen.
We took the usual route home. Every time we turned or stopped, I could feel where we were without looking. My mind’s eye crossed the busy intersection at Dekalb Ave, the right turn onto Memorial, passed by Habitat for Humanity on the left and Grindhouse further up. I had nothing to worry about. I was headed home to my wife, and while I’d had a couple of drinks, I was comforted by the safety of the Lyft. I relaxed into my seat and scrolled through my emails, a few apps, and social media as we rode towards East Atlanta.

I remember looking up as we approached the intersection of Boulevard and Memorial drive. I glanced up to see the intersection. The Lyft driver moved into the turning lane and I looked down at my phone. I could feel the car begin to make the left turn.

Then I woke up.

The air was thick with smoke and little particles of dust and glass and unknown debris seemed to be raining down. I felt my face and body against the backseat and realized I was now laying down. The white airbags hovered all around me like a secret gathering of ghosts. A sharp pain crept up my side, and in the moment I realized – I was in an accident and I had survived. It took a few moments for me to try and make sense of things. The windshield was shattered and while everything else seemed deafeningly quiet, the driver was screaming in pain. I tasted blood and felt some debris in my mouth. Shards from my now chipped teeth scratched the cuts on my tongue and a few fillings had come out from the impact.

As things became clearer, I knew I needed to call my wife. I would’ve called her before the police anyway. But where was my phone?

Clutching my side, I looked around the car but the envelope of pain meant I couldn’t move too far. I reached under the seat in desperation and immediately I felt the phone screen against my fingertips. It was sitting there, unharmed, like someone had set it there for me. Speaking for the first time I realized breathing was much harder. I stumbled through, “Um, I was in an accident and I’m hurt.” It came out almost like a question. Her response was like one long list…“Are you ok? I’m coming right now, where are you?” I hesitated but eventually must have gotten out the location. Luckily, she was at home waiting on me and we were only a couple miles away.

The Police Officer arrived very quickly. He asked if I was ok, what was hurting, etc. I don’t remember my answers but I do remember trying to be tough. I was trying not to complain too much. I didn’t want to seem weak or be a burden at my own accident. The Fire Department sirens and lights came quickly too. It felt like hours, but I would come to learn that it was all a matter of minutes. A chorus of firemen sang the same questions, but instead of letting me act tough, one said “you’re not ok man. Just lay back down.”

My wife runs up.

I could see the panic in her eyes but also the relief when she saw me try to smile. After I described my pain, I tried to convince her it wasn’t that bad, that I deal with these accidents all of the time and I wanted to go home and sleep it off. I promised her if I felt bad in the morning, we could go to the doctor. She looked for a moment as though she was considering my request. I thought my charms had worked. The same fireman said something to her that I couldn’t hear and she said “No, Gino, were going to the hospital.”
The ambulance arrived and multiple EMTs and firemen removed the driver from behind the shattered windshield. His agony was still evident by the tone of his cries. The head on collision required a C-Collar around his neck. Seeing him strapped to a board with tears coming down his face made our trauma all very real.

Another ambulance was on its way, but my wife wasn’t in the waiting mood. She said “no, Im taking him myself. Lets go!” With a fireman under one arm and my wife under the other, I stumbled to her car.
As they helped me to the car, I saw things at the time that I didn’t understand. There was a woman who looked stunned and in a daze staring at the damage to the vehicles. She didn’t look hurt and I couldn’t figure out how she fit into the accident. There was another person sitting on the sidewalk next to the damaged vehicles. A flurry of emergency responders moved in slow motion. Traffic was being redirected around the mangled cars and emergency vehicles. I was speechless.

After painstakingly getting into her car – every step seemed to stab – the lawyer in me kicked in, “Could you take a couple pictures,” I asked. It wasn’t that I was thinking about money. But my experience has taught me how difficult it is to get proper treatment and coverage when you don’t have good evidence.

When my wife showed me the pictures later, my heart dropped. I knew it was bad. And, I could remember seeing some of the damage in person, but seeing it this time was like reliving the horror in clear detail. The two cars looked completely crushed in person but it was almost surreal in that moment. Maybe it was all of the other things happening at the scene. I still can’t place the feeling of seeing, with a clear mind, what could have been the end of my story. 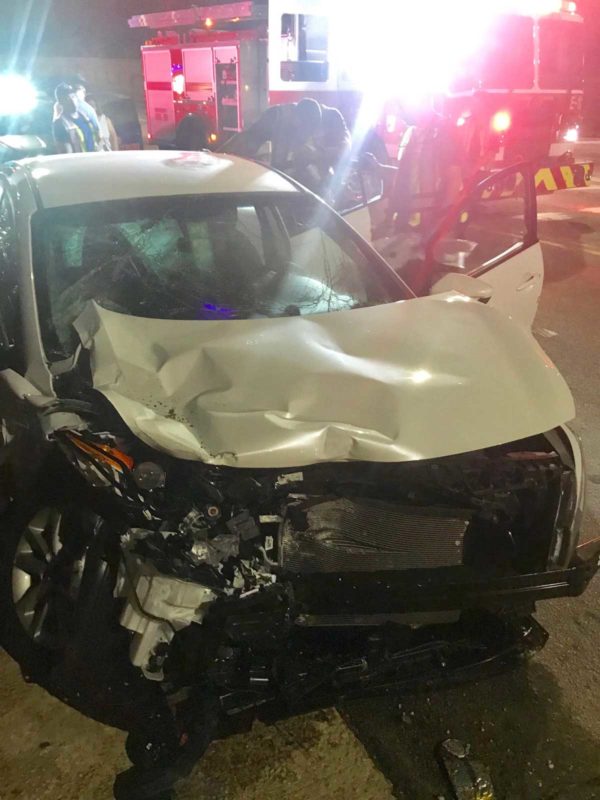 The 6-minute drive to the hospital was agony. Every single bump and crack in the road sent shocks up my side and took my breath away. It was hard to place the exact locations of my pain – in my neck, my back, my face, my head, my tongue, my knee, my nose. My side hurt the most, but my back and neck were throbbing. My headache was so bad I just closed my eyes and tried to fight through the bumps in the road.

My wife got me a wheel chair and brought me to the front of the hospital- ahead of everyone else waiting. She told the front desk attendant that I was in a serious accident and needed to see a doctor immediately. The nurse calmly started down a list of questions – had I been driving, how many drinks I had and what my insurance was – then eventually asked about my symptoms. Another attendant took my blood pressure, wrote something down, and then silently showed it to the other nurse. Whatever it said made them wheel me back to a room to wait on a doctor. A cycle of tests later, another nurse arrived. The only way that I can describe her was, almost, bored. She seemed very disconnected, which in retrospect I understand. She deals with these types of incidents as her job all the time, just like me.
My Mom and middle brother arrived to the hospital a short time later. It was difficult to need their help, but I was thankful that I had so many people around me to care for me. Having them around my bed was comforting but also uncomfortable. I was usually the one in charge, and this was all new territory.

In that moment, I had a small epiphany. Laying in the hospital bed, I thought back to all the times I felt somewhat disconnected from my client’s injuries and how scary and overwhelming the experience of being in a car accident must have been. You’re confused, hurt and then have to navigate advocating for yourself. You leave the trauma of a serious accident and as soon as you get to the hospital you’re riddled with questions like “How many drinks did you have?” “Do you have insurance?” “What’s your group number?” “Who was at fault?” “Did you have your seat belt on?” “What side of the car were you sitting on?” ”Why can’t you remember?”.

Normally these are not challenging questions, but when you have just been traumatized, they can be difficult and you can get thing wrongs. In litigation, lawyers are scouring through your medical records to find inconsistencies. They use your initial complaints and statements and compare them to other records and statements to see if you are “lying.” I felt bad for any judgments I may have had before. Here I was in the hospital looking for help and I was being treated like it was my fault!

The rest of the night transitioned between short bursts of activity and stints of tiresome waiting. An x-ray, a few CT scans, some poking and prodding, pain relievers. Five agonizing hours later, I was released to go home. I was thankful for my life, but had no concept of the road that lay ahead for me physically and emotionally. I was changed and getting back to normal has been more than a notion.